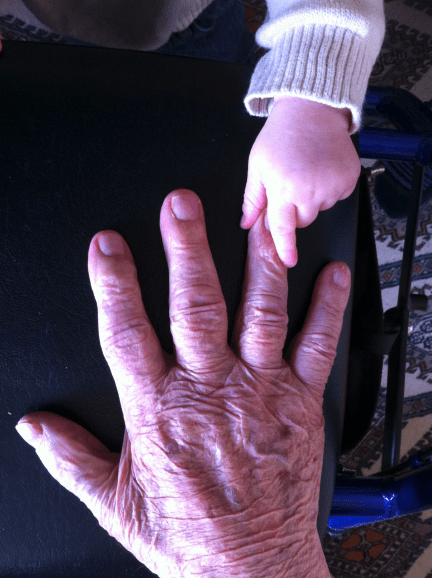 My paternal grandfather first started to wear hearing aids, or as he so adeptly called them: his “hearings”, in his late 80s. With his thick Croatian accent he may have been combining hearing aids and earrings, or he may have simply misheard the words hearing aids and thought they were called “hearings”. You’d think that with two audiologists in his family, his daughter-in-law and grandson, that the process of getting him fit with hearing aids would be smooth and simple. We ran into resistance from other family members on his need for hearing aids, as he “hears me fine”. I think that he faked his way through his hearing loss well, because he had an amazing sense of humour and most interactions with his family members were in his living room while he was on his favourite recliner. But the audiologists in us knew he needed them. He had difficulty with handling them as he had huge hands and poor dexterity. Without help he was unable to handle them on his own. He would only wear them, and he liked to wear them, when someone else would put them into his ears for him.

One story in particular of my grandfather and his “hearings” sticks out to me to this day, and proves what he was missing, unknown to anyone and evidently even to himself. He was visiting my parents, and staying at their house where he would typically get help with his hearing aids in the morning and wear throughout the day. He rather liked to sit in the backyard on their deck and feel the sun on his brow. I would visit with him and join him when I could. One particularly nice spring day he asked me, “Sean, where did all the birds go? There were many singing just yesterday” Pausing for just a moment and listening I could literally hear dozens, if not more, birds singing. Looking back at grandpa I realized he was not wearing his “hearings”. I told him I’d be right back. I grabbed his hearing aids from inside, turned them on and put them into his ears. He instantly said “Ahhh there they are, they came back!”.

To this day I am unsure if he realized his hearing aids were allowing him to hear sounds that he was otherwise missing. I think about that story often and tell it to many patients as an example of what people are missing and at times they do not even realize it. Be it environmental sounds, conversations or music. Hearing well and clearly is fundamental in nearly all human interactions. Helen Keller puts it very succinctly when she said: “Blindness cuts us off from things, but deafness cuts us off from people.”

Whether it be yourself or a loved one, the first step with any concerns about hearing is a full hearing assessment by one of our audiologists.